monumental musings from insight gradually gained in the past few months

The best thing to have happened to the internet: Wikipedia
A mixed blessing: Google
The bane of the web: Online Advertising, and the selfish, greedy businesspeople that follow.

After working hard at setting up niche blogs and such, all I wanted to do was to get some rest. But the blogs needed content, something that was hard to make, and very time consuming to produce, otherwise expensive to buy. I needed content and lots of it. And the content had to be unique.

There exist on the internet multiple programs that can do this task to a certain degree. I won't link to any of them, but one of them is called Blog Content Wizard. Just do a search on google for it. There are, of course, article rewriters and spinners as well, but these either do a poor job or take a long time to make your content.

So what do I do? Well, I'm a programmer. And when faced with a programming task, I jump to my feet and begin solving it! If only online business was as easy. (Sigh).

Anyway over the past few days I've more or less succeeded in my goal, and produced a piece of software that can generate unique content for use online. I wrote it in VB.NET because it was a simple and easy to use language plus it had plenty of build in functions which I found useful (particularly string splitting). I managed to develop an application that will take in phrases from a file I specify (I wrote my own phrase dictionary) and mix and mash them to form new and unique content based on a few keywords I specify. To make it even better, I developed and included spinner technology similar to the one found in Jetspinner. This means that {many|a large number of|quite a lot of} variations of {a sentence|a string of text} can be produced {quickly|with great speed} based on a list of {options|choices}. I also added the ability to load and join multiple dictionaries of phrases together. Combining these together, I get something like this:

I promise your life will improve greatly. I hope you understand what I'm trying to say, don't you? Frankly speaking, The answer is surprisingly simple. Once you have fully understood Yellow Bananas, you won't go back. Believe me when I say this. The previous week, I compared some options for anyone who want to find Yellow Bananas.

Well, half a loaf is better than no bread. Thats the way things are. That is merely my kind opinion. Don't sit on the fence. There is just an overwhelming about of things to write about Red Apples. I believe that I know enough on the subject of Red Apples. Like I already mentioned, keep it in memory.

Now that may sound pretty crappy to normal readers, but it's gold if you compare it to the crap most content generators spew out. Now I'm slowly improving on it by expanding the dictionary. If all works well, I may have a whole lot less work on my hands. Who knows, I may even be able to market this product.


Another slice of life

Hello everyone once again, surprised to see me? I wouldn't be surprised if you were, after all I haven't been posting here frequently. But i'm here today to announce what a few days of hard work, an old domain and some online help have produced...

If some of you remember, I bought the domain qfwr.com over a year ago. Back then my plans for it were the same as my plans for it now, create a free, easy-to-use URL shortening service that people could use create redirects to shorten their long urls. Of course back then I didn't have the resources or the motivation to actually carry out the project to completion.

Fast forward a year, and I've finally completed it enough to be released. Hopefully with this service I will be able to make a couple of extra dollars to "tide through the days" so to speak. With luck and God willing, qfwr might just be the thing that helps me gain a foothold in this harsh online world.

So come on and visit it at qfwr.com. If you like, and I would appreciate it if you do, please link to the website at http://qfwr.com. I really really need all the support I can get.


Back after a month

If you thought my 3D tank was good, then this will blow your mind.
Behold, after many hours of hard work in front of the PC...
My assignment 2 in 3D modelling... 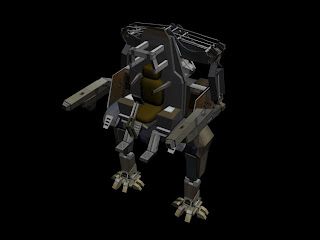 A 3D APU (Armoured Personal Unit) I modelled and textured in just a little under 100 hours.

Now to start the rigging...

Lionel, Sam and I built and launched more rockets after YA on last saturday. Lots of crazy fun firing them off at night, especially the loud bangs. Here's the updated table of the rockets so far.

A few awesome videos to accompany the text...

Exodus I, Exploding with a huge bang.


The Sam Rocket, which was the last rocket we let off, concluding the night's events in a finale shower of sparks. 4th of July comes early!

Speaking of which, today is 4th JULY! To commerate this wonderful occasion, which I have absolutely no part of and does not involve me :\, I intend to launch off the two experimental rockets I made today, X-S1 and X-S2. But the red rocket's glare always brings a wonderful feeling to us all, doesn't it :D


The final flight of Pioneer II

Like all rockets of the "Pioneer" edition, this rocket is of small stature. Composed of a mere 4 sparklers, it can fit into the nose of a regular plastic bottle, from which, in fact, it was launched.

Pioneer II is almost identical to it's predecessor, Pioneer I, except that it had a more balanced nozzle and a lower stability stick, which proved effective in stabilising it's flight (since it flew much farther and straighter than Pioneer I).

It was a cool wednesday night, and my previous launch site was locked up, so I launched the rocket Pioneer II in a different location. This launch proved to be more successful than the previous, with maximum altitude well over 30 feet. The rocket started it's fiery launch at nearly 90 degrees angle, but soon went slightly sideways (about 80 degrees) after the propellant was consumed. Last seen of Pioneer II was a smoldering trail of some rapidly descending bits some 10 metres away. The remains of this rocket were never recovered.

For the first time, here is a video of the launch! Observe the rocket frame by frame as it blasts off into the night sky and takes it's place among the stars before falling back to a cold, hard earth, never to move again.

Video is in portrait, so please tilt your head 90 degrees. Thanks.


A table of my past, present and planned rocket launches. Here are some photos.

You agree that by proceeding (to view the photographs on this web page), you will not attempt to duplicate any parts of the devices shown below. Also, you agree not to store, distribute, or modify any of the photos shown below. You may not use any of these photographs as incriminating evidence against me, by proceeding to view them you agree to indemnify me from any legal liability that may arise from these photos. You also assume fully legal responsibility for any consequences that may arise from attempting to duplicate the devices and procedures depicted here.

If you do not agree, you may not proceed to view the photographs. By proceeding you agree to and accept all of the terms mentioned above. 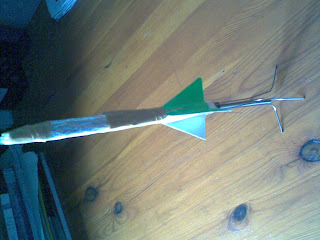 This is the second unnamed rocket, shortly after construction. 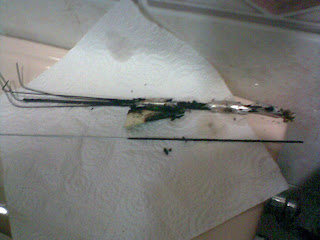 The remains of the second unnamed rocket after its failed launch. 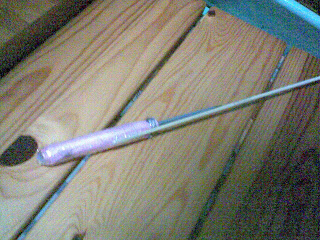 Pioneer I completed rocket. Skewer attached for stability in flight. It is not a firework. 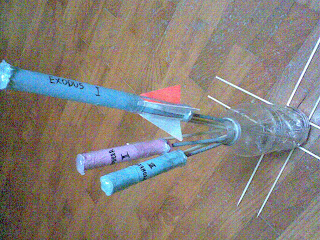 Pioneer II and III, and Exodus I.

I am aware that by posting these photos I am just asking for trouble for myself. But I am so awed by the beauty of this science that it is a risk I am willing to take.

But I can safely say that I have taken all necessary steps to prevent probable hurt or injury to other people, and have taken precautions to prevent probable danger to others, such as carrying out the experiment in an area without combustible matter, ensuring that the launch site is clear and that everyone else is a safe distance away, and wearing a fire proof jacket when lighting the rocket's fuse (except for the first two rockets). Also take note that the rocket does not have any payload and does not explode, nor does it produce any pyrotechnic effects, the only visible output is the light produced from the combustion of the propellant in the rocket. Therefore, it is technically not a firework either.


Boredom Freezes Over
The sun has set. The last breezes of autumn have changed into the chilling drafts of icy air. The once crimson sky is shrouded in a thick gray fog. Winter is usually cold, even in Singapore. But this winter, repeated monotony freezes over. With so many goodbyes, it's no wonder. One must just how a flame of hope can be found in this frozen wilderness...

This skin has been based of the blogskin Winter Moonlight by Milky, heavily modified by HCH.